The case of the missing umbrella.

One of the perks we give Christine, a regular guest from Germany, is a large umbrella on her patio. Anchored in a heavy concrete base. (All guests get an umbrella, but generally a smaller one.). 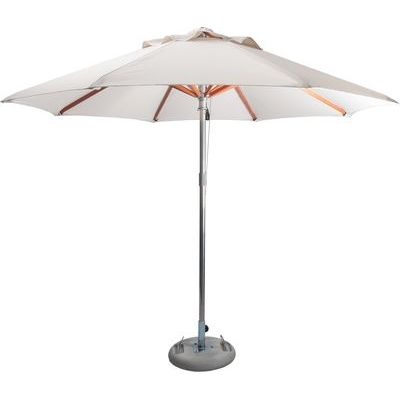 One morning Christine reported that the umbrella was missing. With its concrete stand. She heard some sort of a noise in the middle of the night but did not pay much attention. The Innkeeper immediately sprang into action. As he does in a crisis.

There were a few possibilities:

So, the sensible thing to do, whatever the cause, is to report the thing to the insurance company and let them worry about the exact circumstances of the loss. Which is what I did. They required me to report the matter to the police. Which I did. Later the morning, a police vehicle brought 2 rather portly policemen to Mes Amis. A captain and a constable (song title right there – the Captain and the Constable….). They took a statement and undertook to keep a weather eye open for a suspicious umbrella. Named Steve.

The theft theory was by now gaining ground, its main proponents being Anna and Christine, expounding their view with wide eyes and more than a small frisson of fear. Who can be safe with thieves prowling the property? Next thing we will be overrun by panga-wielding thugs....... Convinced that it is the only reasonable explanation, there were mutterings about installing surveillance cameras, posting guards, chaining umbrellas to the fence. And other stuff geared to prevent the umbrella gang from striking again.

There was no way to prove or disprove the theft theory, but we could eliminate the wind proposition. By looking on the dune and in the bushes on the vacant stand next door for the vagrant Steve. Which we did. And found him. Intact. There must have been a very strong gust of wind that lifted the umbrella over the fence, concrete base and all. That was all.

Steve is back in his usual spot, basking in the sun. Captain and the Constable have ceased their vigilance. And Anna and Christine could put the spectre of roaming umbrella thieves to rest.